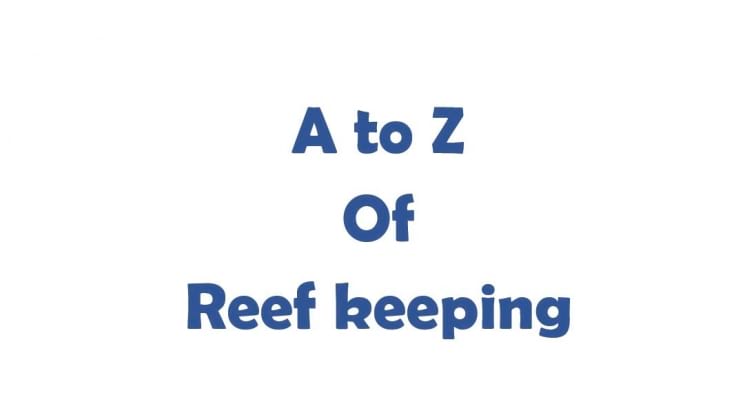 The A-Z of Reef keeping.

Here's our take on the A - Z of reef keeping - can you go from A to Z without copying?

A - Ammonia - Ammonia is a product of fish waste and broken down food waste. This can be toxic to most aquatic life.

B - Bacteria - Aerobic bacteria thrive in oxygen rich water to reproduce, whereas anaerobic does not. In fact, the bacteria can die if exposed to oxygen.

D - Detritus - Waste or debris, normally organic, in an aquarium. This can collect on rock, sand beds or in sumps and filters. It should be removed from the system to control nutrients.

E - Echinoderm - Starfish, Sea Cucumbers and Urchins. All great at filtering detritus and even grazing on algaes.

G - Genus – a taxonomic rank used in the biological classification of living and fossil organisms. Latin names are always genus and then species

H - Hydrometer - An instrument used to measure the specific gravity of aquarium water.

J - Juvenile -   A juvenile is an individual organism that has not yet reached its adult form, sexual maturity or size. Juveniles sometimes look very different from the adult form, particularly in colour.

K - Kelvin - Colour temperature of lighting is measured in degrees of Kelvin.

L - Live Rock - Ocean rock that contains a host of good bacteria and micro-organisms within its structure. Great at aiding biological filtration.

M - Mangrove - A plant that grows in brackish waters. Some aquarists use these in a sump to consume excess algae-feeding nutrients.

N - Nitrate - The end product of the nitrogen cycle. Can be removed chemically, biologically or via water changes.

O - Ozone - Is a reactive gas made up of 3 oxygen atoms. It is a great steriliser and used to treat and prevent parasites and promote clear water.

Q - Quarantine - To house livestock away from the display aquarium for a certain amount of time. Parasite or bacterial treatments can be used in quarantine that cannot be used with corals and inverts.

S - Sump - Glass or acrylic tank usually found underneath the main aquarium. Acts not only as a filter but also increases system volume.

U - Ultraviolet - UV sterilisers prevent disease by using UV light to disrupt the DNA of bacteria and parasites.

V - Volitans - The Volitans Lionfish is typically found in the Indo-Pacific region but is considered an invasive species in the Caribbean and parts of the USA.

W - Wavemaker - An electrical powerhead used inside the aquarium to replicate the movement of the ocean.

X - Xenia - A hardy, fast-growing soft coral that is also know as a Pulse Coral due to its pulsing motion within the aquarium. Seen by some as a 'weed' coral.

Y - Yolk Sac - The food source within a sharks egg or 'mermaids purse' that feeds the shark during incubation before birth.

Z - Zooplankton - Unlike plant-based phytoplankton, zooplankton are tiny animals. They feed on phyto and smaller zooplanktons but,in turn, feed tiny fish all the way up to whales!