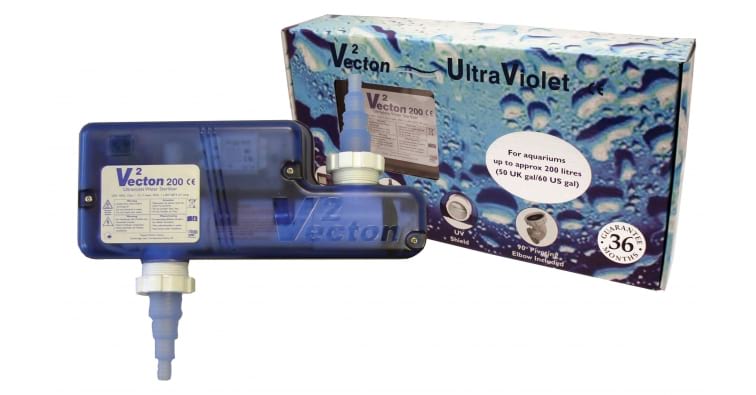 We all know the saying “prevention is better than cure” and nothing could be more important than with aquarium diseases. When bacteria and pathogens build up in an aquarium they can cause many nasty diseases (which could be fatal for your fish) and are extremely difficult to eliminate once they have taken hold.

A UV steriliser is therefore an essential weapon in preventing disease as it significantly reduces bacteria and pathogen levels in the tank and greatly improves water quality.

But exactly how does a UV work?  Well, here’s the science bit ...

UV or Ultraviolet is a term used to describe the wavelength between the blue violet range of the visible spectrum and the shorter wavelength or X-rays.

The ultraviolet spectrum is divided into three separate bands:-

UVc is often referred to as the “germicidal wavelength” because of its ability to destroy micro-organisms. The lamps in all of TMC’s UV sterilisers emit the whole spectrum of ultraviolet with its most significant part at a wavelength of 253.7nm, which has been found to be the most efficient for germicidal action. 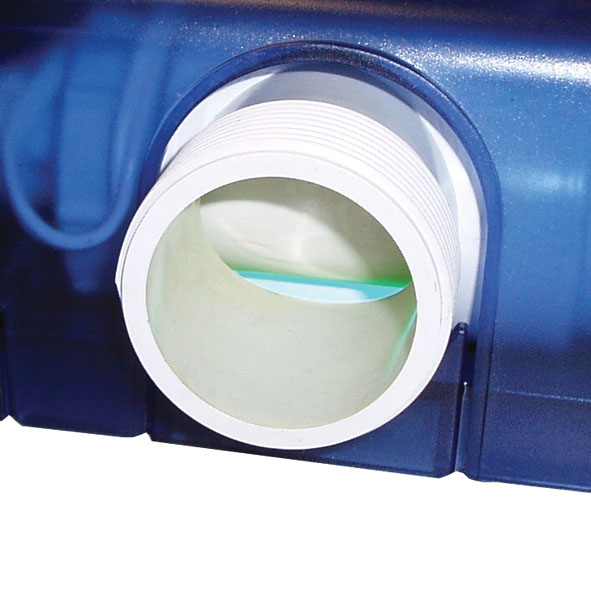 When water is passed through a V2ecton UV Steriliser micro-organisms contained in the water come into contact with the UVc radiation emitted from the UV lamp. The UVc radiation penetrates the cell membrane and either
destroys or debilitates the micro-organism.  Different micro-organisms vary in their susceptibility to UVc radiation.  The most sensitive, and therefore the easiest treated, are most bacteria and single-celled algae such as those often found in ponds and aquaria.

It is important that the UV lamp reaches its optimum operating temperature of 40oC otherwise the lamp will not produce the required wattage of UVc radiation and the efficiency of the unit will be compromised.  For this reason, V2ecton UV Sterilisers are fitted with a protective fused quartz glass sleeve, which keeps the UV lamp from direct water contact which would otherwise act as a coolant.

This sleeve is manufactured from fused quartz glass as this material allows the highest possible amount of UV light to penetrate into the water.

Other materials should not be used as they could have a real impact on the effectiveness of the steriliser by significantly reducing the amount of UVc that reaches the water.

Any deposits of fat (from the fishes’ diet) or calcification on the quartz sleeve will dramatically affect UVc penetration so the quartz sleeve must be cleaned regularly, following the manufacturer’s instructions.

V2ecton UV Sterilisers are designed to have a minimum contact distance.  This is the distance between the lamp surface and the inside of the plastic water jacket. The UVc emitted by the lamp is only able to penetrate a certain distance into water and this distance is determined by water clarity and what is dissolved in the water.  This means that the UVc will penetrate further in clear freshwater than it will in clear saltwater.

By keeping this contact distance to under 10mm, the micro-organisms are exposed to the highest UVc radiation even in aquariums that have less than ideal water conditions.  At under 10mm contact distance the UVc will be effective in the vast majority of aquarium environments.

Most bacteria and single-celled algae will be destroyed or debilitated on a single pass through the V2ecton, whilst more complex organisms will need multiple passes through the steriliser.  To achieve effective penetration we now know that the micro-organism must be exposed to the full strength for a specific (although very brief) period of time.

If the aquarium water is murky or has a yellow tinge UVc penetration will be affected.

The UV lamp inside the V2ecton has an effective life of up to one year.  Although the lamp may still be glowing blue (when viewed through translucent hosetails - never look directly at a UV lamp) at the end of one year it will be emitting less UVc radiation.  If the V2ecton lamp is not changed annually then it will be less effective.

In typical aquarium applications it is normal to circulate the volume of aquarium water through the V2ecton between two and four times per hour.  This will help control some micro-organisms that are capable of reproducing themselves up to three times per hour.

WHY BUY A V2ECTON UV STERILISER?

A V2ecton UV Steriliser is very simple to use with no set up required ... you just plug and play!  Also, as no chemicals are used it is completely safe for your fish and will not harm biological bacteria used in filtration. There are 5 models in the range so you can find the most suitable size for your aquarium:- 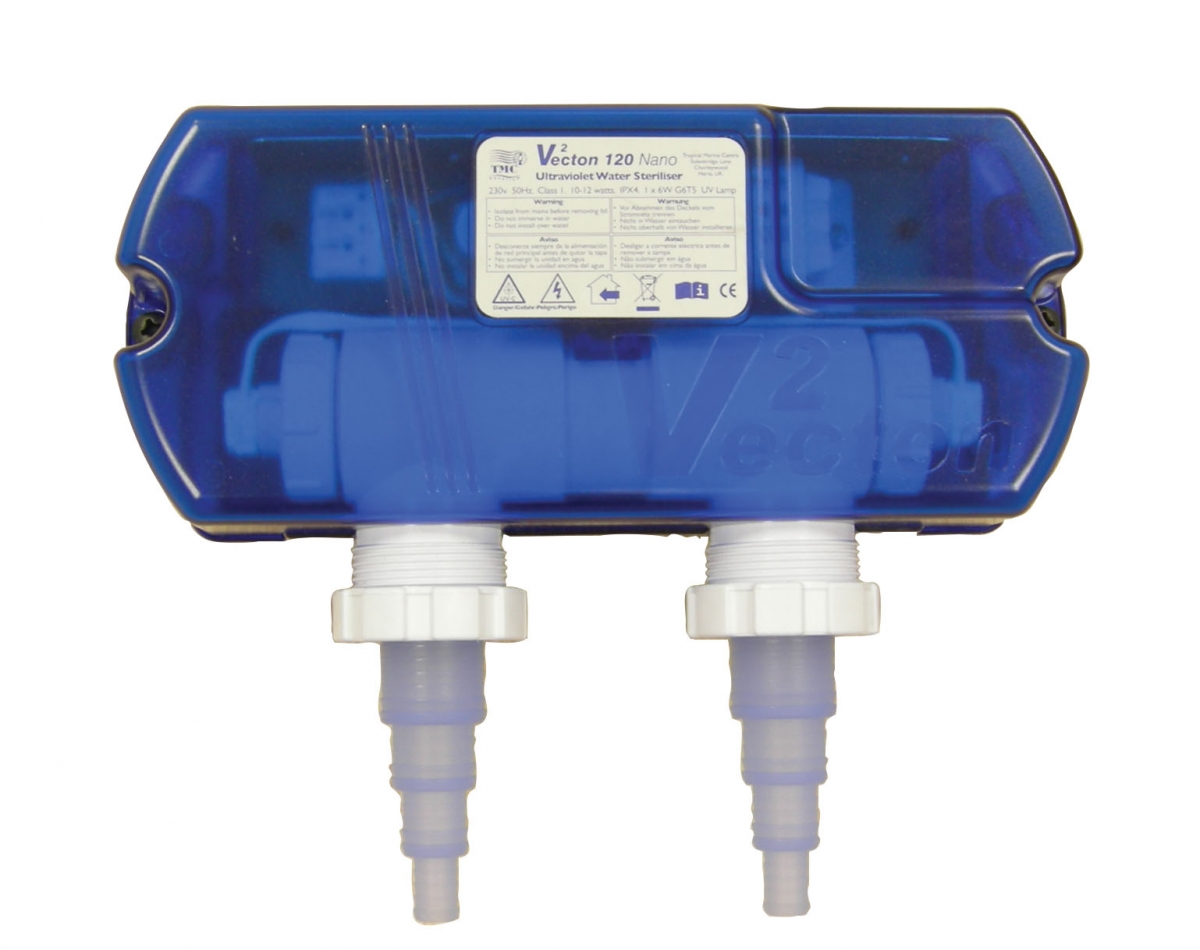 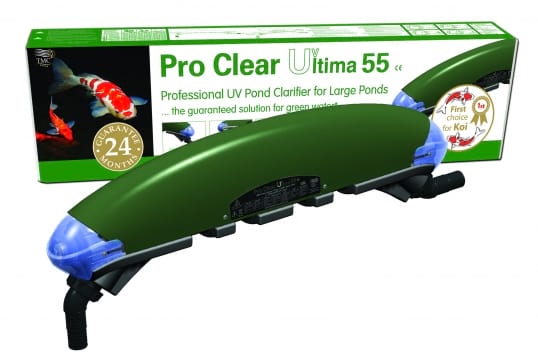 Did you know?...Pro Clear Ultima UV 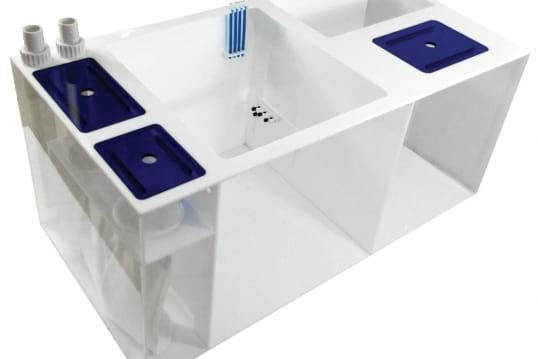 Sumps and Their Set Up